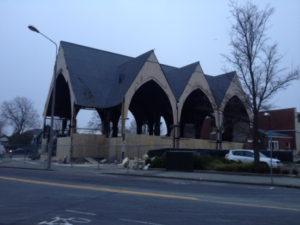 Just because your life’s fallen down doesn’t mean there’s nothing left I thought as I gazed at the skeleton of Knox Presbyterian Church in Christchurch. Instead of being desolate, this space had a stark kind of beauty.

On the whole, space, silence, and nothing are discomforting. So much so that we try to fill space, banish it, shift it, tie it down, and explain it away, anything other than live in it. Perhaps it deserves some reimagining.

Punctuated a bit differently, nothing becomes no-thing. No-thing that can be tied down, described, contained or theologized about in concrete terms.

Like the mysterious No-thing, hidden behind a curtain in the holy of holies, deep within the great Jewish temple of Jerusalem. Only approached once a year by the high priest, someone with the wit, imagination, and experience to treat that space with extreme caution and awe.

In the Jesus story, this curtain rips as he dies on the cross. Christianity likes to say that consequently, the curtain keeping us from the Divine has been dispensed with. Follow Jesus and the reconnection with God is complete. Sadly, there’s an implicit rejection of Judaism and a lack of spiritual imagination in that version.

While thinking about God is important, the spiritual journey also requires an engagement with the Divine in ways that arise out of our creativity rather than the rational mind.

The ripping of the Temple curtain is a story crucial to this reimagining. Instead of seeing the curtain as a problem holding us back from God, perhaps it’s purposeful, helping to shield us from space, the alluring mystery that has to be crept up to in ordinary time and even more so when our lives fall down.

Whatever your spin on it, this ancient story seems to be about tangling with Divine space. Something everyone has a sense of and capacity for, even if they’re not hooked up to organized religion. Re-imagined, the curtain may not rip but be briefly pulled aside so that glimpses of the mysterious space are possible whilst control of it is not.

More and more I think the role of the church in society needs to be about this space. Helping curate and facilitate community story, conversation, music, art, and ritual, here today and gone tomorrow. Facilitating glimpses of the Divine.

I think this is following in the path of Jesus. Being fresh bread in the moment. Spacious presence to be generously shared beyond the confining menu of creeds and constructed belief systems.

So, God might have said, ‘along with the light and all that other good stuff, let there be space, and let’s see how you get to grips with that!’