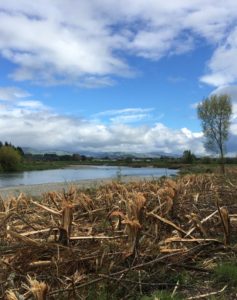 ‘It’s apocalyptic, said my friend as we looked out across riverbank willows ripped to shreds. She’d felt like crying as the big digger fed its gaping maw day after day. Felt the same on my morning walks with Kali the Labrador as we picked our way through the desolation that used to be soft foliage and soul space.

Gone is the small portal that we ducked under as a ritual beginning of a new day, a nod to my spirituality of doorways and liminal spaces. Paths trimmed with hand secateurs to avoid disturbing the bush are now knee deep in debris. The stone cairn, lovingly built by a man in memory of his wife and added to by other walkers, is hard to reach as the ground is churned up to mud.

Like a bad haircut it will all grow back and, like over-zealous hairdressers, the regional council responsible for the razored landscape had good intentions. We all want to see more of the river, which the willows obscure and the willows need to be saved from toppling over. Understood, except that people make meaning in these spaces and that’s important too.

Charles Waldegrave and other therapists from The Family Centre in Wellington offer a definition of spirituality that helps make sense of why we feel such pain when the environment is plundered, good reason or not.

This definition had an interesting genesis. It was formed from three cultures, Maori, Pacific and Pakeha (European) trying to work together in a therapeutic environment and recognizing that the place of spirituality at work was seen very differently by different cultures. For Pakeha, it appeared to be an optional extra, whereas for Pacific Island and Maori colleagues it was an integral part of everyday life and what’s more, connected to the land and environment. It’s all about primary relationships.

Cutting the land then is not an isolated, mechanical action even though it might look like that from the perspective of an organisation that needs to get a job done. Instead, cutting into the living earth, particularly when it’s done in a way that appears disrespectful, hacks into our sense of interconnectedness that somehow relates to the numinous, that which is beyond and some people call God. No wonder it can make you weep and mourn and feel an unrelenting sense of desolation.

Part of seeing spirituality as primarily about relationships is the accompanying awareness that restoration is important when relationships, in all their varied forms, go wrong. So, I was impressed when my email to an elected official resulted in a council staff member arranging to come and walk the river paths with us to see what can be done. Here’s an opportunity for restorative justice then.