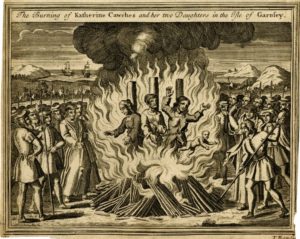 In the old days, we used to burn heretics. Nowadays, there are more subtle approaches. The Reverend Gretta Vosper, a United Church of Canada minister has undergone the new methods by being deemed unsuitable for ordained ministry. Gretta doesn’t take the bible literally, nor does she go in for supernatural ideas about God. She even calls herself an atheist along with many others, some who connect with Progressive Christianity ideas.

There’s a strong connection for me with Gretta’s story because my theology is considered out of step with that of a priest in the diocese where I work. This means I do not have a bishop’s licence, which is a church accreditation.

Despite this, theology, the art of thinking about God, or wondering what we mean by God has enchanted me since I was a child searching for meaning in a fundamentalist Baptist family. It was given wings through studying theology at St John’s Theological College, the seminary for New Zealand Anglican priests.

I was 45 years old and a first-time university student with an unquenchable thirst for knowledge and a direct, questioning approach. A bit like a possum on speed caught in the headlights. My wonderful teachers had much to cope with but didn’t falter. They made sure I never read any ancient text literally and gave me the tools to mine them for gold. They pushed me to think, to read widely, to pursue truth, however uncomfortable it was, and to understand that by doing so it would likely bring me the odd spot of bother in the institutional church. They weren’t wrong.

Amidst wonderful and challenging years of school, military and hospital chaplaincy I’ve also coped with soul destroying battles about theology. But unlike Gretta, I don’t have the stomach for an ongoing fight with the institutional church because, in some places, theological expansiveness has been narrowed down from an abundant, life-giving river to a tragic trickle. This is not the gloriously flawed but expansive institution that formed and shaped me to be a priest. It is something else entirely.

My courage is needed now in the stimulating work as Spiritual Care Coordinator at MidCentral District Health Board where we have been developing a Transforming Spiritual Care strategy designed to embed compassionate spiritual care into the health system. Basically, we’re developing a vibrant, professional service that meets the needs of a changing market. As you can imagine, it has its challenges. I’ll keep you posted.

So, I’m now stepping out onto the spiritually independent path with no formal ties to any church or religion. It does feel strange; there is loss and grief combined with an intense curiosity about how this new stage will evolve. The fascinating thing is that I continue to live a soulful life, possibly more so than before. I’m still engaged in the intense exploration of what we might mean by God, all the time embracing wisdom from the sciences, religions, arts, humanities and popular culture to help me on the quest.

And every day I give thanks for all the heretics that have ever lived. It takes courage to question and speak your truth to power. Kia kaha Gretta.

Image credit: Katherine Cawches and her daughters, one pregnant, were known as The Guernsey Martyrs who were burned as heretics in 1556. They were originally arrested for the theft of a goblet but found not guilty on that matter. However, during the course of the investigation, it emerged that their religious views were contrary to those required by the church authorities. Burning was the punishment.