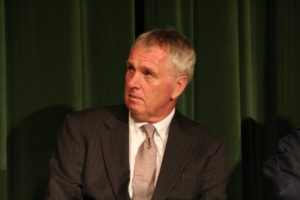 I want to tell you, and anyone else in earshot, that you were one of the most encouraging people I’ve ever known. You were also generous, kind, clever and remarkably adept at making archaic systems work for good.

You were the school principal of second and third chances, a teacher who’d seen it all before but wasn’t ground down by that. When you listened, for the umpteenth time, to another tall story devised by a teenager to avert disaster, you acted as though it was all original and that no matter what had gone wrong, everyone and everything was redeemable. And you did it all with a simple, straightforward welcoming presence. No airs and graces, just a smile and the encouragement to have another go at life. What a gift.

Some may find it strange that I’m writing to you now that you’re dead and shouldn’t I have said these things when you were alive. Well, we did talk about some of this but that’s not the point. I reckon that the things we say at funerals, around the kitchen table and at the pub after someone’s death are essentially about the people left alive, as we try to figure out who we are in the light of the relationship that’s now gone.

I remember the first time we met. You were the principal of an Anglican school and I was the potential chaplain. You had the big desk and flash office with the panoramic view but seemed quite dismissive of all that without saying a word. It was the smile and no-nonsense friendliness that disarmed me. The down to earth, ordinary way of being that you had, an openhanded, egalitarian generosity of spirit, which made even casual encounters with you worth something every time.

No-one could hide as you strode about the school with that sure, measured tread, torso pushed slightly forward as though it might get there before you. You knew everyone’s name and something positive about them. When I saw you out and about I always felt reassured and encouraged that, even in the most difficult times, everything would be ok. You had a no-frills, humble approach to being human and I was sure it was often re-energised by your frequent visits to the gardener’s shed where much wise reflection on life’s peculiarities went on over a cuppa.

We had some taut times during those years of working together. Exploring progressive theology from the pulpit and in the classroom got some lips pursed on more than one occasion. You would glance across at me with that look, knowing there would be a complaint or two about my latest theological handstand. But you were pragmatic throughout and deftly dealt with circling wolves. What mattered most to you was that the students were engaged and thinking beyond the limits they might have set for themselves.

When things got tough for me with Year 10 assassins (any new teacher will understand that!) you taught me a valuable lesson. ‘Ask them what they’re thinking’, you said.

‘They’re not’, I replied with some frustration.

“Of course not’, you said laughing, ‘their brains aren’t joined up. But it never hurts to remind them how useful thinking is if only they could remember to do it’.

You were gracious enough not to point out that applied equally to all of us adults too. It was a salutary lesson in neuroscience and patience that I continue to call on when meeting older assassins these days.

No-one expected that one of the most engaging and enduring things about our collaboration would be the traditional night prayer service in the old and evocative St Martin’s church. Those first candlelit services when we had no electricity were magic. You would turn up when you could and sit in the quiet with the boys who’d ambled over from boarding. It was all unpredictable but strangely connected with that which is more, even if most of us couldn’t find enough language to describe what it all meant for us. And if you noticed the long extension cords running across the grass from the auditorium to keep the heaters going, you never mentioned it was a health and safety hazard. Thanks for that.

Neville, I know we all see and experience people differently. Some people will have similar memories to mine and others will have recall that is not so positive. Whatever the memories, I reckon they’re expressions of the relationship we have had in life and all of it matters, the good and the not so good. As you used to say, channelling Viktor Frankl, it’s not what life does to you that has the final word but how we respond to it that can matter most and help us make meaning.

I thank you for your responses to the grittiness and muddle of life, and the gift those responses have been to me and still are. Your graciousness reminded me that the way forward was not always that flash, instead, it was often about walking alongside rather than leading from the front. About treating everyone as though they were of enormous value even when they might have been driving you to distraction.

You had an ordinary acceptance of life and everyone in it, and an unnerving tendency to exhibit the qualities of the Jesus character over and over again, although you might not thank me for that observation. I think that’s your legacy, a powerful, creative and forgiving influence that keeps on working if we let it.

Right now I imagine you sitting with a beer in your hand, chuckling at something provocative a reprobate angel has said while sitting at a heavenly WOMAD festival that includes surf lifesaving, tours to places you’ve never been, and rugby. As to people missing you, I reckon you’d just tell us to get on with it and have another crack at life. Thank you for everything Neville.