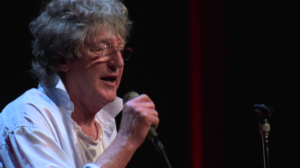 Last time I saw Sam Hunt perform I was drunk in a pub in Wellington. We all were, him too most likely. It was what you did at those gigs where poetry and plonk were like riding a bicycle for two. As he says, we all had pain to be soothed.

Decades later I wondered how it would go in a theatre with just a cup of Earl Grey tea on board.  I needn’t have worried. The old resonating rhythm was still there, drawing me in, scraping my sensitive spaces. Soulful stuff that seeped in somewhere between my intellect and the unconscious.

And it’s not just the poems, although I love the one about Tina, the barmaid at the Southern Cross. He thought her name was Christine, a bit like Christ. He was wrong. She wasn’t best pleased and thought he could write another.

Stories and memories he pulls out of Kiwi life, threading them together with more expletives than Judy Dench uses, make him the priestly soul he is.

Apparently sober these days he still had a wine glass of something red beside him. That’s the old Dean Martin trick; the crooner who never drank a drop but always appeared ever so slightly slurred. It probably made him more accessible like Sam is in a pub.

They said to stay after the show and meet him. I didn’t. It seemed a bit artificial. Instead, I let the rhythms resonate as I walked the dog. Wouldn’t have minded him walking alongside though. Telling stories, swearing, reciting poems – open for confession.