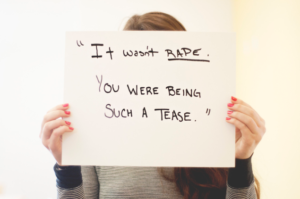 New Zealand’s ‘rape culture’ is in the news after a group of teenage boys allegedly had sex with intoxicated underage girls and then bragged about it on Facebook. The report triggered memories of my own.

As a young mum, I watched my two-year-old heading over the fence in her first bid for freedom. Her contempt for confinement was normal but, like every parent, I remember feeling both terror and delight as she took off.

My mother leaned more to the terror side, fearful of sin and its consequences. There was plenty on offer as we twisted through the 60s, thinking ourselves the height of sophistication with skirts no bigger than a cumberband, joint in one hand whilst swigging atrocious Cold Duck. All this when men saw women as easy meat.

Some of us were raped. Our clothing and quite reasonable bids for freedom had nothing to do with it, but they sure were included in the razor-sharp guilt we internalized and proceeded to slice our potential to ribbons with.

Telling your mum was not always an option because she too was caught in the idea that women were temptresses and so might think it was your fault. Going through the court process was asking to be publicly devoured.

Over the last 50 years, I’m not sure that much has changed. Under those circumstances, I can see why we become fixated on petitions to parliament and social marketing programmes that aim to improve human behaviour. However, human beings are living contradictions and like it or not, we’re stuck with sexual drive, violence, and perilous choices.

Coming to grips with this, in our self and others, is part of developing a spiritual understanding of life.  By this, I do not mean easy conversion to a brand of religion that offers quick answers. That’s the kind that oppressed women, saw sexual expression as evil and helped developed our current situation.

Instead, I mean the long journey to the interior, well described by Richard Rohr in ‘Falling Upwards: spirituality for the two halves of life’. He suggests we have to be able to recognise the potential of both losing our way and feeling at odds with life. That would be an understatement right now.

This recognition is disorienting, frightening and angst-producing, and can happen at a personal and/or community level. Finding our way back to wholeness says Rohr requires the heart, not the mind and courage instead of fear.

Changing New Zealand’s rape culture is not only a matter for police, lawyers, academics, and legislators.  We have all been, the church included, joint designers in a value system that got us to this point.

Growing up, so that we can let go a value system that tears us apart, will take the cooperation of us all. First of all to recognise that we have come unstuck and then to find life-enhancing ways back to wholeness.