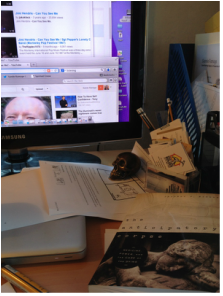 Amongst the debris on my desk sits a small skull. It’s just big enough to remind me that I’m not long for this world.

No, I don’t have a diagnosis that may make you feel awkward, other than being terminally human that is.

Keeping the end in sight instead of trying to clutch at immortality is life-enhancing; a way to live that enters into the soulfulness of our existence. Put another way, it’s a reality check, a way to figure out what really matters.

I’m not alone in this view. Philosopher Stephen Cave argues that striving for eternity shapes everything, even our choice of breakfast. But that leads us astray and stops us from facing up to the challenges of living life well.

In his book, Immortality, Cave suggests that humans have relentlessly pursued immortality through four paths:
1.      staying alive in the same body – keeping the existing body going
2.      biotech interventions – pills, potions and surgery
3.      resurrection – the religious idea of heaven someplace else
4.      legacy – we live on in our deeds and generations to come.

‘But aren’t you meant to believe in life after death,’ said my colleague, staring at me intently over his espresso.
‘Depends what you mean by that,’ I said, mindful of the physicists who reckon we emerged from stardust and to stardust we will return. Although it’s a sparkling improvement on dust, it’s still a hankering for immortality.

‘The religious writer Karen Armstrong said the afterlife was a red herring that kept us avoiding the real issue,’ I offered.
‘What’s that mean?’
‘She thought religion was supposed to be about the loss of the ego, not about its eternal survival.’

‘So, when you say you’re about death as a priest you mean death of the ego?’
‘A bit of both, I think. I’m not so keen on destroying the ego, but absorbing it and getting it in better balance.   Moving past the need to be top dog, which is, when you think about it a bit, probably part of the quest for immortality.’

‘What about physically dying then?’
‘I think that’s the last great task of a human being, where all of our existence comes together in a process of reconciliation.’

‘How do you do that?’
‘Sometimes, it’s a process of putting things right with the living. That’s why it’s good for family and friends to gather whilst someone is dying. Other times, it’s just letting go of the need to stay alive, to allow it to be finished. Put another way, it’s to quit hunting down life at any cost.’

Living with my desk skull is a daily spiritual practice. Like the medieval philosophers before me, it reminds me of my impermanence, the need to embrace that and, as a result, step soulfully into my mortality.

2 Replies to “Living with my desk skull”