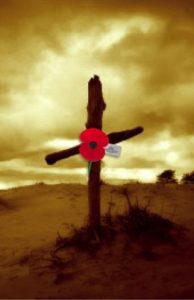 All of them are dead.  The bones of Jesus buried deep in Palestine and Kiwi soldiers in Turkey.  Although we post-moderns might like to believe we don’t venerate relics, there’s an annual resurrection attempt every Easter and Anzac Day.  Two festivals that jostle for space in New Zealand and sometimes collide head-on.

Christianity now being passé for Kiwis, Jesus is out and soldier worship in.  A Colmar Brunton poll found honouring our servicemen is more personally significant than Easter for 51 percent of New Zealanders, compared to 11 percent for whom Easter is the more significant of the two.

One reading of the Easter story has Jesus as an innocent lamb being sacrificed to appease an angry god.  Given that all communities have a tragic tendency to grasp at sacrificial lambs it’s not surprising that we Kiwis have plugged the gap left in worship rituals by turning dead soldiers into heroic saviours.

In mythological terms this means they act as gods who fight monsters to save us from being overwhelmed.  They may then share the spoils of war, which in this case are enticingly called the freedoms we enjoy today.  And if you’re not convinced that Anzac Day bears the hallmarks of fundamentalist religious belief, try questioning anything about the state’s most holy day and feel the vitriolic reaction.

Yet there’s nothing holy about these execution stories.  Both Jesus and the soldiers at Gallipoli were killed by powerful regimes that wanted complete domination.  They used whatever was at their disposal to get it and anyone who got in the way was mincemeat, irrelevant cannon fodder, only the means to justify an end.

The Jesus stories sketch out a very different worldview where we treat others, even our enemies, as we wish to be treated ourselves.  The conscientious objectors tortured during World War I because they wouldn’t play the war game had similar views, although expressed differently.  And the soldiers who staggered back from war knew that there were no enemies, only unbearable suffering that knew no national boundaries.

The tragedy with Anzac Day and Easter is that we have been sucked into the idea that someone else has to die so that we can live better lives.  Jesus would have been horrified at that notion.  I imagine the soldiers sobbing in the trenches before forced over the top could also see the stupidity of the concept just before they died.

Turning these people into gods and saviours is to devalue their fragile humanity, sidestepping our responsibility to challenge the systems of violence that are subtly threaded through our society and leave us open to destruction.

Only trouble is challenging the status quo takes a hell of a lot more energy than a dawn parade and looking solemn once a year.  It can even get you killed.

Originally published on spiritedcrone.com 24 April 2011 and in Otago Daily Times 27th April 2011 as Honouring sacrifice sidesteps real challenge and on Ekklesia as Easter and ANZAC: Worshipping the gods of war

2 Replies to “ANZAC Trumps Easter in Battle of the Gods”