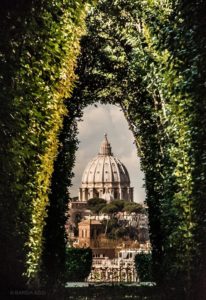 I’ve been thinking about the most wonderful keyhole in the world as debates about public prayer have been on the agenda of city council meetings in Bideford, England, and Whanganui, New Zealand.

To look through this keyhole you have to go to Rome and walk up the Aventine Hill until you get to the front door of the Knights of Malta. Instead of knocking on the door, bend down and put your eye to the keyhole. It will take a while but eventually, an astounding view of St Peter’s Basilica will appear through an avenue of trees. The trouble is, if you tried to understand the Vatican from that one perspective you’d be way off beam.

Trying to understand prayer in the public arena is equally troubling. There seem to be two theological issues worrying councillors. The first assumes prayer is a petition to a particular kind of God who may or may not grant human requests. In human development terms, this is God created in human form usually living in the clouds with the added benefit of supernatural powers.

Michelangelo’s beautiful painting The Creation of Adam springs from this literal interpretation and has helped embed it in the human psyche. However, it presents a one-dimensional God too lacking in nuance and subtle tones to make much ongoing sense to humanity.

The second vexing issues for the politicians is whether or not prayer is the property of the Christian church. If so, then the view is that it must be removed from council business lest the church influence matters of state. Fair enough, Kiwis and Brits value a secular society that allows for a wide variety of religious view to co-exist.

However, times, traditions and perceptions have changed. Prayer is not and has never been, the property of any church or particular religious tradition. Ways of understanding God are moving on from Michelangelo towards a subtler exploration of the mystery that threads its way through the universe. A human journey that pre-dates the Christian church and has always used poetry, art, mythology, story and music to reach for what remains tantalisingly out of reach.

In Aotearoa, New Zealand that nuanced journey has been given new expression inside and outside the church by progressively mixing and mingling Maori karakia, blessing and rituals with our public life. Although the process has sometimes been fraught with discomfort and resentment, it’s a gift, a unique way of linking spirituality with civic activities.

Spirituality tangles with gaps in our systems. The nebulous, hard to fathom aspect of human experience like connectedness, love, meaning, hope and purpose that might be held out as ideals but can be missing or downplayed in our everyday world. Meditation, mindfulness, contemplation and varying prayer styles are the way many people worldwide explore these aspects of human yearning whether they have a religious tradition or not.

Under those circumstances perhaps everyone in public life could be inspired to take a few moments at the beginning of any meeting to stand back from the keyhole and be still. To let the gaps act as a prompt for just and merciful actions, and a humble approach to everything. In this way prayer emerges as a way to reconnect community, not a belief system owned by a few.