‘You’re not boss of me,’ could be the petulant response from a junior God not yet clear of its identity, 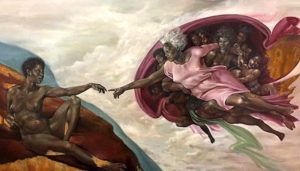 to the Episcopalian Church’s intention to change their prayer book. Quite! If God continues to live and breathe, then Godde might want to have a say, particularly when the Episcopalian’s are keen on presenting God as gender neutral. ‘What?!’ gasped Godde again, suddenly galvanised when faced with passion-less Christianity intent on stripping the life force from her.

Given the gender-sensitive times we live in, it’s understandable that the Americans might want to play safe, especially as we Kiwi Anglicans only managed minimal inroads into the patriarchal control of God with our revised prayer book, despite 25 years of wrangling and a great deal of creative wordsmithing. But it would be tragic if gender neutral was the automatic fall-back position because there’s potential here to activate something more inspirational than a revised book that will become entrenched as the authorised, and only version.

In true Anglican fashion, even although the Episcopalians are separate but connected (don’t ask, the Anglican Communion is far too difficult to understand – just think complicated families who scrap a lot but say they love each other), there’s going to be a lot of talk, papers written by erudite theologians, debates across factions and a number of stone tablets consulted. This will mean nothing new available until 2030, by which time it will be out of date again and God may have left the building along with the rest of us ordinary folk.

On the other hand, another process could unfold that took seriously the ideas and experience of the wider community. The point would be to ensure that Godde ideas remained fluid, alive with imagination and creativity, open to wide interpretation and not controlled by the inner circle, theologians or the organisation.

After all, this is actually how it is now. People decide for themselves how they imagine or experience God, or not. But they get little help in this important task from the God professionals because they’re too busy defending authorised ideas about God or telling other people their ideas are not right. You may have experienced that yourself, I certainly have.

Theologians and church folk would be part of the project but on an equal footing that was an authentic community partnership. The results would be online, an organic Facebook or Instagram God account that was never static but always evolving as the Spirit moved. In this way the church could begin to be a doorway to the transcendent, fostering and encouraging what some call our natural instinctual spirituality. This would move institutional Christianity away from the unfortunate tendency to see themselves as the destination, with a sense of rightness and entitlement to know about God. This is disempowering in the extreme if you’re not part of the in-group.

As Catholic priest John Dourley says in his book, The Illness That We Are: A Jungian Critique of Christianity, the human spirit can get mightily hacked off when faced by notions of infallibility and claims to exclusivity whether they’re attached to an organisation or a book. And it’s all the more infuriating when these claims block or obscure someone’s natural spirituality or religiosity that, when connected into the unconscious, can have healing and restorative powers.

But if there is a natural spirituality for humans, it raises the question of where the gods and goddesses, Christian or otherwise, arise from. Carl Jung had the view that they arose from the human psyche and deeper still, out of the collective unconscious. At the heart of that was a maternal element known as The Great Mother, from where all light and dark emerges. This is a profound challenge to a 2,000 thousand-year-old religion that has made an ongoing production out of male supremacy.

To take this seriously could mean that male imagery for God and the consequent sense of entitlement for human men in the church could be completely subverted and female imagery became the norm.  No wonder gender-neutral language is seen as the way to go because the patriarchy is not going to welcome the subversion of male power through the rise of the female Godde any time soon.

‘You mean,’ said Godde, ‘I could become whole and visible again?’
‘Oh yes,’ said the little girl, eyes wide with surprise at being face to face with Godde. ‘It says so here,’ holding up her book.
‘The Girl God,’ said Godde, eyes dancing. ‘Where did you get this?’
‘My mum gave it to me,’ said the little girl. ‘She said it was written to help me get over that unhelpful gender stuff in regular religion and find my inner divine.’
‘And have you?’
‘I think so but it’s different every day as though we’re both growing up together.’
‘You mean like we need each other?’
‘Yep. You can’t grow without me and I can’t grow without you.’
‘Perfect,’ said Godde as she sat down beside the girl and started to read.