The giant creature Seraphina went up in flames on Wellington harbour. Within her maternal belly 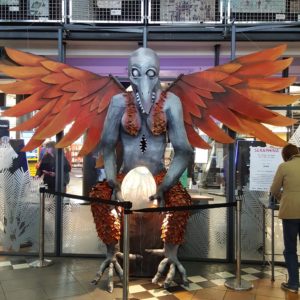 were notes holding the secret desires, dreams, yearnings, and concerns of the locals. A form of confession if you like. The whole thing was cathartic, passionate and regenerative with an ability to connect us deep into our primal selves as part of the annual Lōemis festival marking the winter solstice.

I mused on this as Kali the Labrador and I snuggled up on the couch in our annual winter Netflix binge, eyes longingly fixed on the possibilities after 21st June. Well, I binge watch, she’s not so fussed. But soon, the emerging light, like a symbol of new life, calls us both to experience the world that is magically transforming itself again.

Instinctively, I want to mark the movement from darkness to light but down here in the southern hemisphere, my mother tongue Christianity has its new life Easter festival going into winter instead of out of it. The festivals and symbols are out of season, transplanted as they have been from the north. It’s one of the reasons Kiwis find it hard to make sense of the Christian stories any more.

Another option in Aotearoa is to mark Matariki, the Pleiades of the South Pacific, most obvious at this time of year. There’s a sense of magical wonder when the chant of karakia resonates through the dawn mist as people gather to mark the movement from darkness into the glorious light. The festival gains strength from year to year, but however much I respect Māori spirituality, I get anxious about taking on another belief structure when, like organised religion, there’s a corporate understanding about what the symbols and stories are meant to mean. That doesn’t work for me now.

Religion or spirituality have to act on a range of levels to resonate for people. First of all, there has to be a visceral grip, in other words, get us in the guts at the place where we can say yes, aha, I get that even if I don’t have words for it. The stories, music, art, and rituals have to reach down deep and connect with the chaotic, passionate and ultimate incomprehensibility of human existence. At the same time there has to be an intellectual credibility that makes sense of our lived experience in our particular time and place, that binds us back into the source of life, or the ground of being as Paul Tillich, a 20th-century theologian called it.

Matariki and Lōemis work at that visceral level because they arise from our awe and wonder at finding ourselves adrift in the universe as vulnerable creatures and a recognition of the Earth’s regenerative potential. The mythology and rituals that emerge from that lived experience are not to be read or believed literally. Instead, the mythology is a complex wisdom that speaks in a symbolic language not easily understood but pointing to deeper ways of being that helps make meaning of our lives and relationships with each other, the Earth and whatever we understand to be sacred.

But, however much visceral, imaginative or intellectual sense there is in someone else’s spiritual or religious tradition, trying to convert to or adopt a tradition that is not your own will not sort whatever drove you towards the alternative in the first place. A mother tongue is so embedded in the core of a person’s being that even if there is a wholesale rejection of it for all the best reasons, it is never done with you, nor you with it unless you can find a way to access the core of spirituality that arises within, unhindered by organisational or cultural imperatives.

My own experience of this is my ongoing struggle with the way Christianity has been divorced from its passionate, imaginative and mythological roots to be literalised, concretised and embedded in moribund power structures often concerned with telling people what to believe and how to behave. This was brought to a head one night when I dreamt of myself in full clerical gear with a fishing line tied in an elaborate but deadly noose around my neck. One false move and I would have been garrotted. The Jungian Analyst and I were in agreement, the church had me around the neck and it was potentially fatal.

Picking over the remnants of a religious or spiritual tradition within one’s psyche is hard and confronting work but it’s worthwhile. As I pored over the fragments I came to understand that my mother tongue goes back further than the rule-bound and passion-less Christianity we have been bequeathed. My mother tongue arises from before the world began, out of The Great Mother, the Divine Feminine, the pulsating power of creativity that contains all that is good and everything that is dark. How that is expressed seems to have turned into a life-long task for me, but an energising one.

Instead of relying on any particular group to authorise me or my exploration, it’s up to me to expand my mother tongue by engaging with my unconscious to work out for myself what my mythology is, what symbols matter and how I can put them together to feed my soul in an ongoing passionate and regenerative process.

Seraphina’s ritual burning appealed to me, in part because she has been brought to life and will go through the disintegration process supported by the public library, who have no skin in the spiritual or religious game. The rituals are open for us all to interpret as we will but even so, they dive deep into the collective human yearnings we all tend to share.

Perhaps this is the way of the future in a secular state where libraries, who hold the stories of people in a non-partisan way, will encourage us to activate our imaginations to bring to life our spiritual sensibilities through events and rituals that touch our core.

And there’s no better choice this solstice than Seraphina whose name arises from the Hebrew, seraphim, which loosely means fiery angel. May she light up the night as she bears our sorrows and fears.

2 Replies to “Burning Seraphina: a solstice to get you in the guts”