Can you close the curtain? 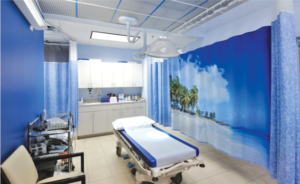 Sure.
We call them the blue soundproof ones.
Yeah, nah, not, it’s an illusion.
(He laughs)

So, what does God look like for you today?
See that blue?
Yeah.
It’s like the sky and the sea.
So, God comes to you out of the blue?
Far out!

I thought of Carl Jung
who said that gods and goddesses
rise up out of the unconscious.
Only when we project them out
do they become territorial,
jealous of their space,
protective, combative.

Space, undefined, unknowable,
not owned by you, me, anyone,
offering, well, space
to be what I need it to be.

The blue, blue sea
symbol of the deep,
unconscious rising.

Somewhere between these two
we make something
of the space.
Never the same twice
always unique to you,
unknowable to me.

I walked away
knowing he was surrounded
by out of the blue God.

This prayer/poem/whatever was created out of the conversation I had when visiting a seriously injured man.

The visit came after I’d been thinking about the very Christian dominated chapel in the hospital where I work and the problem of Gods and their symbols owned by particular groups who might see their exhibition as paramount.

I’d also been reflecting on the importance, in this hospital and perhaps in the whole of life, of allowing people the space to decide for themselves what has meaning, or is sacred to them.

And it’s nice to know, don’t you think, that there are many versions of the famous blue, not so soundproof, hospital curtains as the image illustrates!

2 Replies to “Out of the blue God”