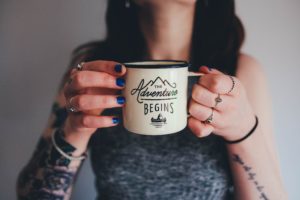 When I was at theological college I was fascinated by how it was perfectly acceptable to see the first chapters of Genesis as mythology but not necessarily the Gospel of Mark, an action-packed narrative that forms the bare bones of the Jesus story, embroidered on by the later writers of Matthew and Luke then given a creative twist in the Gospel of John.

Here, says John Carroll, author of The Existential Jesus, ‘he gestures enigmatically from within his own gruelling experience, inviting the reader to walk in his shoes.’ An altogether impossible task for 21st-century folk, so Carroll suggests that the invitation is a call to inhabit the depths of the inner self, to reflect on the nature of being itself.

This call to an interior life whilst lauded at various times in the Christian tradition is not, in my experience, actively nurtured to any great extent and I can understand why. For to do so shifts the centre of authority from the external church to the still small voice that arises from within and more, to mystic experiences in the manner of Mechthild who ‘sallies forth to her tryst with her divine lover in the Godhead where nothing can come between the divine and the soul since the two are by nature one’.[1] That’s complicated and awkward in a religion that has tried to purge sexuality, passion and feminine power from its myth, which makes it lopsided according to John P Dourley, author of the explosive little book, The Illness That We Are: A Jungian Critique of Christianity.

The Illness was handed to me in October 2017 and I devoured it in two days. Part of the attraction for me was Dourley’s contention that Christianity had ‘lost access to the depths of the human soul and spirit as expressed in symbol and acted out in rite.’ This hit home as I recalled the myriad of rites that I had created when a school chaplain and the power of these, particularly when we left it to the participants to make their own meaning rather than say what it was meant to be. Invariably, those rites engaged the person at an unconscious level and made their mark beyond anything I could do or say about it. Rite has primal power.

Or maybe it was because Dourley offered no safe harbour for the institutional church, pointing out that the human spirit can feel, ‘justifiably outraged by conceptions of infallibility and claims to exclusive and exhaustive truth attaching to either book or person – all the more so when such claims tend to obscure or even to block the natural religiosity of the psyche and the attendant healing and whole-making power of the unconscious.’ [2] Hallelujah sprang to mind.

Given that John Dourley was a Roman Catholic priest, academic and Jungian analyst, his work takes on an added mystique and demands attention, particularly when he suggests, in line with Carl Jung, that ‘the genesis of religious experience of the Christian God as well as all the pagan Gods and Goddesses are within the human psyche, even if beyond the ego’s manipulation or control,’[3] and that part of our human task is to develop our own myth in concert with the unconscious. This time a hallelujah burst out of me.

What followed was seven intense months of weekly dream analysis with Emeritus Professor Dourley, a man with a brain like a galaxy in motion, an earthy, passionate man, humble, creative and with a penetrating sense of humour, the master of devastating one liners.

John’s book and the analysis changed everything for me. I began to see that my writing about spirituality was a vital part of reimagining my mother tongue, the Christian myth, as a pathway to personal integration. And that I had to encourage what was rising to meet me from the unconscious and not allow the institutional church to shut that life-giving process down.

A few weeks ago, John died suddenly as solstice symbolised the deepest darkest part of winter for me in the southern hemisphere and the delight of summer in his beloved Ottawa. As Leonard Cohen sang, ‘It’s a cold and it’s a broken hallelujah’ now.

But although John is no longer at the end of the phone every Friday morning, his often-repeated words ring strong and true within me, ‘Write Sande, write what they say you’re not meant to.’ He knew what he was talking about. For me, that means reimagining the myth so that I can create my own in a close tango with the unconscious, perhaps the nature of being itself. Let the adventure unfold.

4 Replies to “Reimagining the Christian myth: a tribute to John P. Dourley”