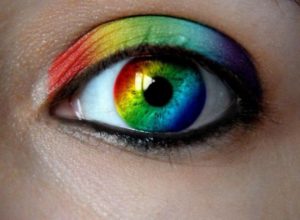 Rainbows are a universal sign of hope, although they only exist in the eyes of the people who see them and sometimes in their photos.  How intriguing then that biblical storytellers saw this trick of light as the sign of God’s promise.  Talking about the God that was nowhere to be seen before science discovered the unsettling idea of nothingness.

Nothing appears to be more important than we want to imagine.  For reality, as physics writer Amanda Gefter says, ‘may come down to mathematics, but mathematics comes down to nothing at all.’  She quotes the late physicist John Wheeler who said that the basis of mathematics is 0=0 and that all mathematical structures can be derived from something called the empty set, the set that contains no elements.  According to mathematician Ian Stewart this is the dreadful secret of all mathematics, that it’s all based on nothing.

This experience of nothingness first confused me as pre-teen answering altar calls at our local Baptist Church.  I responded, repetitively.  At first my sainted mother approved of this overwhelming commitment to Jesus.  But eventually she tried keeping me in my seat with a delicately gloved hand clamped like a steel crampon on my thigh.  Waste of time.  I just kept racing to the front.  I had a pull to the Divine quite beyond my rational control.

At the time it all seemed to be for nought.  Nothing ever happened.  I wasn’t fulfilled.  Salvation didn’t stick. In fact, I felt worse, experiencing more emptiness, disconnection, just a big fat nothing.  The science of no-thing was converging with my experience of God as nothing at all.

The spiritual leaders around me saw my increasing bewilderment and constant questions as a lack of faith and yet I was having the most important discovery of my life, this awareness of No-thing, a calling into the absent and invisible God.

‘Can you not get it into your heads,’ says Jesus to his disciples when they try to keep children away from him, ‘that the kingdom of heaven belongs to these kids because if they don’t get No-thing now they’re going to find it doubly hard later on.’ I’m paraphrasing the story in Mark’s gospel but that’s about the size of it.

We come from nothing and go to nothing.  That seems so insubstantial it creates despair, terrifying in a world that values substance, credibility and certainty. Despair that drills down deep as the awareness of our own irrelevance begins to creep, uninvited and unstoppable, into consciousness. It’s the important but uncomfortable cognisance of nothingness.

Living into that reality with a sense of childlike awe shapes how we see rainbows, despair, hope and meaning and well, just about everything.  Religion and science both seem to be rediscovering that now although Jesus seemed pretty clear about it 2,000 years ago.

Amanda Gefter: ‘Is Everything Made of Numbers’, New Scientist, 29 September 2012.

13 Some people brought their children to Jesus so that he could bless them by placing his hands on them. But his disciples told the people to stop bothering him.

14 When Jesus saw this, he became angry and said, “Let the children come to me! Don’t try to stop them. People who are like these little children belong to the kingdom of God. 15 I promise you that you cannot get into God’s kingdom, unless you accept it the way a child does.” 16 Then Jesus took the children in his arms and blessed them by placing his hands on them.