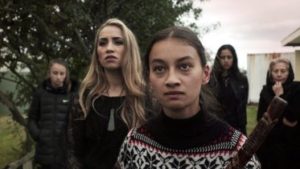 Waru is powerful and uncomfortable. Eight stories all linked by the death of a boy. On the surface it’s about child abuse, confirmed by the co-producer Kerry Warkia who said the project was, ‘born out of heartache, love and passion to protect our children.’

Even so, after seeing the movie my friend and I had to head to the pub for a debrief because it didn’t seem that straightforward.

No story runs in straight lines. There are always layers, some known to the author and some only known in their unique ways to observers as we inhabit the story from our own perspective and consequently change its meaning. Perhaps the directors understood that when they said they wanted to challenge perceptions and start conversations.

Ranui was the story that got under my skin. Waru is dead at the hands of his caregivers and lies on a marae with one grandmother and family. Another matriarch arrives to take him back to a different resting place. The dialogue is poetic, full of metaphor and mythology, and whilst expressed in Maori the sub-titles keep viewers engaged with the interchange between two powerful women.

Director Renae Maihi explains by saying that someone needed to come for him so that ‘our little one’s mana was not forgotten and our duty of care to his wairua into the afterlife was not ignored.’ I’m not clear whether she sees this literally or metaphorically although she does mention being influenced in the development of this story by interviewing kaumatua whose consideration of ‘Te Ao Wairua, or the spiritual realm was a natural part of life.’ Those interviews would have been enriching experiences and perhaps encouraged Maihi in her belief that cultural restoration will contribute to healing for us all. She may be right.

But I started to wonder about the undercurrents in Waru; questions about gender, power and the patriarchy. These thoughts were sparked by the men in the movie. None of them, despite attempting to strut their stuff with enthusiasm, remain in the mind as heroic. Instead they appear ineffectual, peripheral, labelled a dick in one story or just plain absent. That’s telling.

Grappling with the past and mining it for riches to make the reality of now into a better world, is a messy human business. It’s not peaceful, clean or calm. Mining beliefs, or what is taken for granted has an awful tendency to tear apart the ground we think we stand on.

It questions mythology and how that was formed, wondering who and what benefitted by the development of the old stories, who stands to gain now and who is made powerless by adopting the past as a template for today.

Nine Maori women directors have made a movie that, intentionally or not, leaves questions hanging. This is part of Waru’s charm and challenge. My mate and I are keen to see what these women come up with next. We’ll see you down the pub for a spirited conversation.