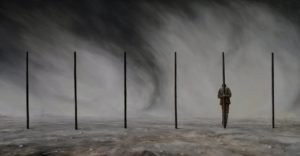 Archibald Baxter is a hero to me.  I remember him on every Anzac Day. It’s my way of saying that his story, marked by brutality and torture after he refused to fight in World War I, is a vital missing chapter in our collective memory.

Perhaps it’s shame and embarrassment that stops us from talking about the brutal way that he and other conscientious objectors were treated. How he was imprisoned and then effectively kidnapped to the front. How he was bruised, bloodied and beaten. Not once but many times.

On starvation rations for much of the time and sentenced to Field Punishment No 1, an exquisite form of torture. Tied tightly to a pole, sometimes crucifixion style, for up to four hours at a time. On occasion, the ropes tied so tightly that they cut into his flesh and completely stopped the circulation.

Baxter, Mark Briggs and others, ‘were tortured in varying degrees, in the most astonishing recorded instance of State-sanctioned cruelty which New Zealanders have ever inflicted upon fellow New Zealanders,’ writes David Grant in his book about New Zealand’s anti-militaristic tradition.

When I first read about this torture, a great emptiness opened up inside me. I felt ashamed that this was part of my history and largely hidden from view, explored by playwrights, artists, and poets, but missing from the official Anzac Day commemorations.

As the atrocities kept marching across each page of Grant’s book, I found it difficult to keep reading, that is, until the incident in Abeele, a little town on the border of Belgium and France.

Baxter always refused to go on parade when ordered. This day he was beaten severely by an officer but resolute still refused. The enraged officer ordered a group of soldiers to drop him onto the wire covered wooden walkway, complete with upward protruding nails.

Ordinary men, silently shouting their opposition to cruelty and by their loving actions, as the Jewish tradition says, responsible for bringing God into the world.

Baxter’s vulnerability called forth outrageous acts of compassion from others who were deeply affected by his suffering. His story creates discomfort because it shows the necessary fragility of the military that’s glossed over when we only tell the heroic tales that are officially sanctioned. We need this story in our collective memory lest we forget the tragic truth of the matter.